My Mensa Test Results - Not Great, Not Terrible.

My Mensa test score just came, it says that I'm great, I'm in 3% population of the most intelligent people in my country, BUT I'm not in 2% so I'm not "genius" and I can't be a member of a high-intellectual society of the Mensa organization. Ok, so what does that actually mean? 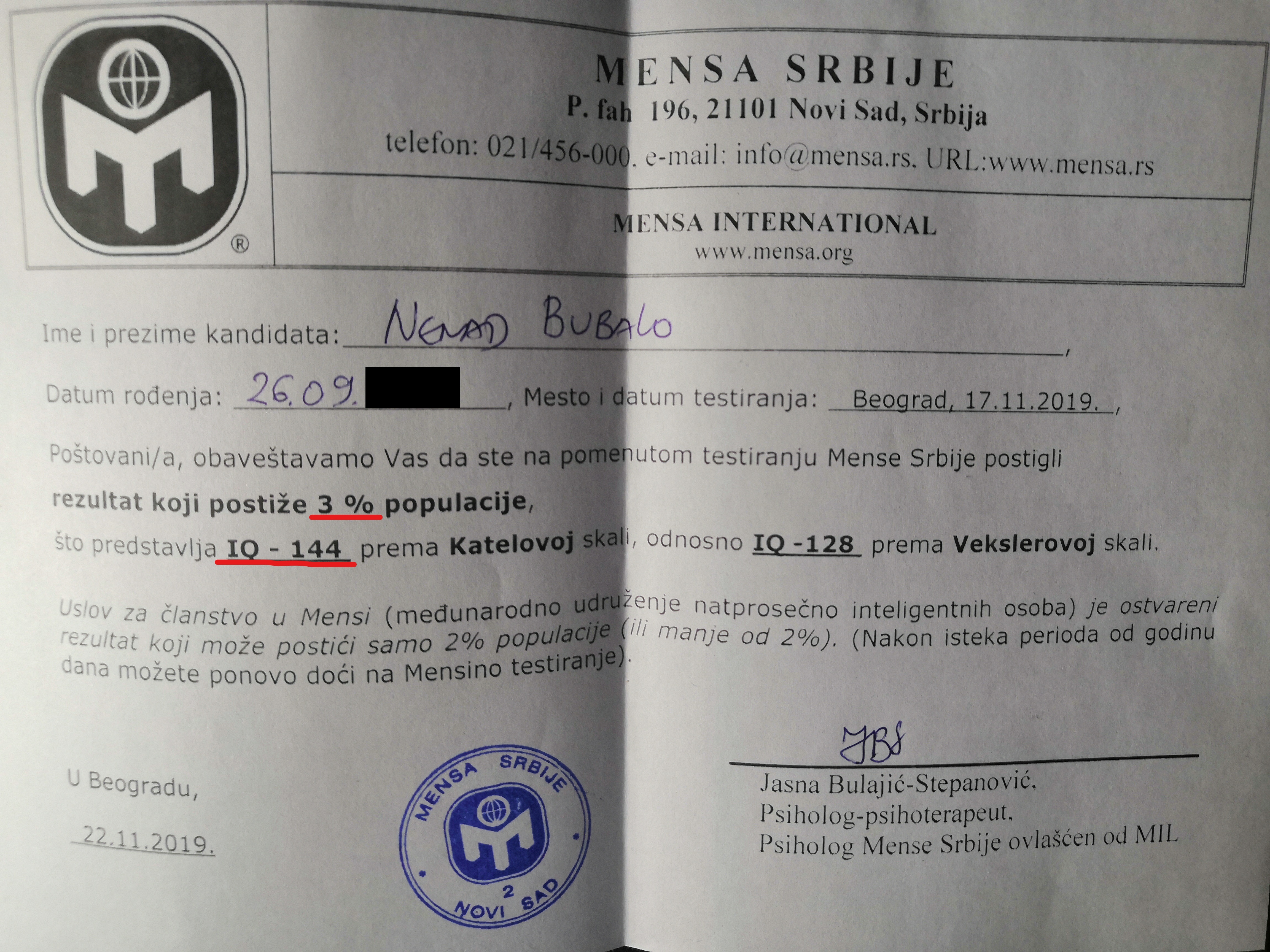 They tell me to try again, maybe I had a bad day or I had a hangover from the night before since this is the first time I took the test, I can take it two more times in my life, but in a year I will probably forget about all of this. My fiancee is a member of Mensa for as much as I know her, Mensa couldn't calculate her intelligence from one test because she aced it, she needs to do more tests so they can determine the exact number of her brain biological ability to comprehend and do complex logical functions. Of course, she doesn't give a damn about something like that, high intelligence made her so lazy, that there is no a single thing that she would do if she doesn't have to or like to do. Her learning ability and academical achievements indeed came easy and almost natural, that I almost looked at her as a higher human being, after that thought she tried to talk with a cat outside, so no she is normal, normal as a person can be. She only needed much less time to acquire the knowledge than the rest of her co-students and co-workers. That "superpower" in the form of higher intelligence made her probably the laziest and the most magnificent person I know. Truth is that she probably can achieve anything she wants in this life but she just has to make herself to want it, and that is probably the toughest job she has to do. So the high intelligence also comes with a curse. In the end everything is about people personality, the statistics says that you can do any job even become an astronaut if you want to, if you have an IQ higher than 100, you just need to work harder and you need more time. I tested myself or lets say I tested my intelligence for the pure fun of it, also there is a little bit of curiosity, after all, I live with a genius for God sake, as we all know there is a saying in psychology that opposites attract, I wanted to test that and after results, I don't know where we stand with that, to be honest. I am definitely not a "genius" and I hardly can be called "stupid" after measured IQ of 144 on Cattell scale but the idea about "opposites attract" doesn't fly.

My result gave me zero answers about questions I wanted to know before the test, but now I'm able to make some conclusions. There are a lot of factors to determine between failure and success in any field of life, but at least I know now that, whatever happens, it's not a result of limitations of my brain and intelligence.